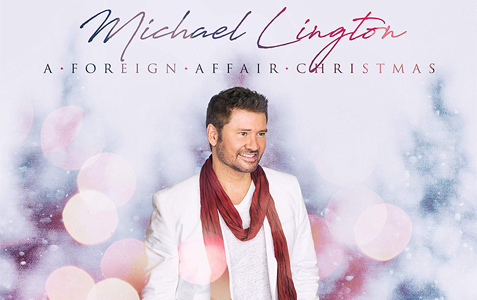 A Foreign Affair for Christmas

A year ago, when Michael Lington was celebrating Christmas in Barbados, he was blown away by a local band incorporating traditional and contemporary Christmas songs.  So being the intuitive artist that this Copenhagen born/L.A. based saxman is, Michael was inspired to fuse these different elements together himself.  Why not mix influences from his European background with Cuban, Jazz, R&B and Gospel elements when putting together his first Christmas album? The celebration begins on the opening number - George Michael's 'Last Christmas', given a foreign twist by guitarist Marc Antoine's beautiful sax arrangement. Add in some vibraphone from Philippe Saisse and percussion by Luis Conte.  Another holiday favourite, ‘This Christmas’, features the beautiful voice of  Vince Gill and stays true to Donny Hathaway's original, with its lush arrangement by keyboardist Greg Phillinganes and Lington, that includes Gill’s guitar, Nick Dale's trombone and Michael Stever's trumpet.  Michael was one of the featured artists on the 2019 Dave Koz and Friends Christmas Tour, so of course Michael has included Dave’s invigorating sax playing on a medley of the  Christmas classics, 'Winter Wonderland' and 'Let It Snow'.  Dave’s soprano  and Michael’s alto and tenor sax are a match made in heaven.  Other guitarists joining the party are Chris Standing on 'Silver Bells' and Adam Hawley on the traditional European carol, 'A Child Is Born in Bethlehem'. This is a contemporary arrangement  by Michael, collaborating with L.A. based keyboardist, Hans Zermuehlen and the talented David Garfield (George Benson’s musical director).  Powerful vocalist,Shelea, delivers a Whitney Houston inspired version of 'Have Yourself a Merry Little Christmas' accompanied by Lington’s killer band  composed of Eric Valentine (drums), Alex Al (bass), and Greg Phillinganes (keyboards) with a guest appearance from  Paul Jackson Jr.  It's a joyful rendition of this great classic  We've waited 20 years for Michael to figure out what kind of sound he wanted on his first Christmas album and the wait's been well worth it.  It’s elegant and classy - just the way we like it at this time of year!

Merry Christmas everyone and thanks for listening!

What Is Your Go-To Boredom Remedy?