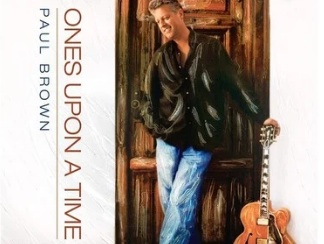 Ones Upon A Time

Imagine you are one of the most successful smooth jazz producers of all time? Imagine you have won two Grammys and produced over 60 #1 hits for other artists? Imagine you started your musical life as a drummer (Long John Baldry), then an engineer (Diana Ross, Luther Vandross, Aretha Franklin) and now your inimitable guitar style has evolved into one of the most recognizable sounds in the world of contemporary groove?
What do you do next?
If you're Paul Brown, you pull 10 songs out of the vault.  And not just any old ten songs. Ten songs that YOU produced for other artists that all went to #1 on the charts. And then you record them yourself, reinventing perfection by putting your own unique stamp on every song.
That is Ones Upon a Time, a brilliant and exclusive collection of super-hits, rendered exquisitely by the master himself. "Notorious" (featuring Richard Elliot) leads the way. Sultry, sexy and oh so smooth. "Just Chillin'" (with fellow uber-producer Darren Rahn) showcases the seamless way smooth groove superstars roll together - chill and chic. "Tequila Moon" gets a little funky, "Grazing in the Grass" (with Euge Groove, who actually got his moniker from Paul) is all retro R&B and "Now 'Til Forever" combines Paul's groovy guitar with Dw3's velvet vocals.
Paul says, "Even after all these years I truly feel that I’m continuing to evolve as a guitarist, and I’m glad the way the genre is right now allows artists to follow the deeper passions of their musical hearts more than ever before. With each album, I feel like I’ve grown as a musician and artist, and I’m a far different player than I was when I recorded Up Front. When that came out, I had never performed a live show as a guitarist. You can practice an instrument in a room all you want, but until you play live, you don’t acquire a full level of skills. All of that gigging has helped me grow technically, and playing what I have imagined in my head is a lot easier than it used to be. The freedom and confidence I have gained from those translates to my personal development and allows me to bring fresh new ideas into the studio.”
Great old songs and a fresh new take. With Ones Upon a Time, Paul is upping his game to a whole new level.
Do I see a third Grammy in his future?
The answer is yes.
Vickie van Dyke
Morning Host
Prev Next

If you were to learn a new skill, what would it be?