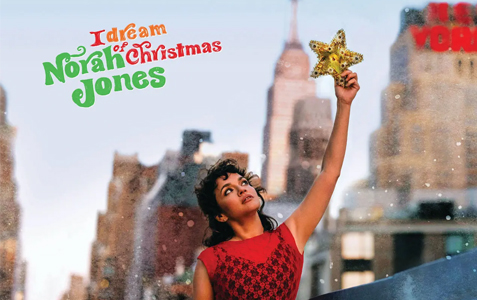 I Dream of Christmas

Her father taught George Harrison how to play sitar and her mother was a New York concert producer. It was all about music in Norah’s early days with dad, Ravi Shankar, and mom, Sue Jones, listening to musicals and more.   So it’s no surprise that when she decided to move back to New York after growing up in Grapevine, Texas (just outside Dallas), Norah felt like hanging out in coffeehouses, meeting musicians and creating songs with them. That led to a record deal with Blue Note and a huge Grammy win for the aspiring singer! Now 20 years later, she has just released her first ever Christmas album and it’s worth the wait.

Sure, the classics are there, delivered in  her unique Texan/New Yorker twang. But five original songs shine with the smoothness of Nina Simone (think of her ’67 song, 'I Want A Little Sugar In My Bowl’) and Billie Holiday.   One of these is ‘Christmastime’, co-written with producer/musician Leon Michels (Sharon Jones & The Dap Kings).   The lyrics... “rejoice, the precious spirit I see, has brought all of the love, I feel it in me, It’s in me, Christmastime” as well as the simple piano, bass and drums accompaniment give it a real gospel feel.

That original is followed by ‘Blue Christmas’ - but what I love about it is that  her version pays homage to Ernest Tubb's 1950 recording rather than to Elvis Presley's version seven years later. Jones does just what you think she would do with Christmas favourites like ‘White Christmas’, ‘Winter Wonderland’ and Lee Mendelson/Vince Guaraldi’s ‘Christmas Time Is Here’ from  A Charlie Brown Christmas - she keeps her arrangements slow and smooth. Just picture her in an intimate jazz club with her band connecting with her audience in a very personal way through these Christmas songs. Something she’s probably dreamed of since she was a kid in Texas.

Play this while you’re at home all cozy in your Christmas sweaters and you’ll be dreaming Christmas too.

** Christmas note - there are four extra tracks on the Amazon Deluxe Version, including 'I’ll Be Home For Christmas'.  Merry Christmas everyone!

How are you feeling today?